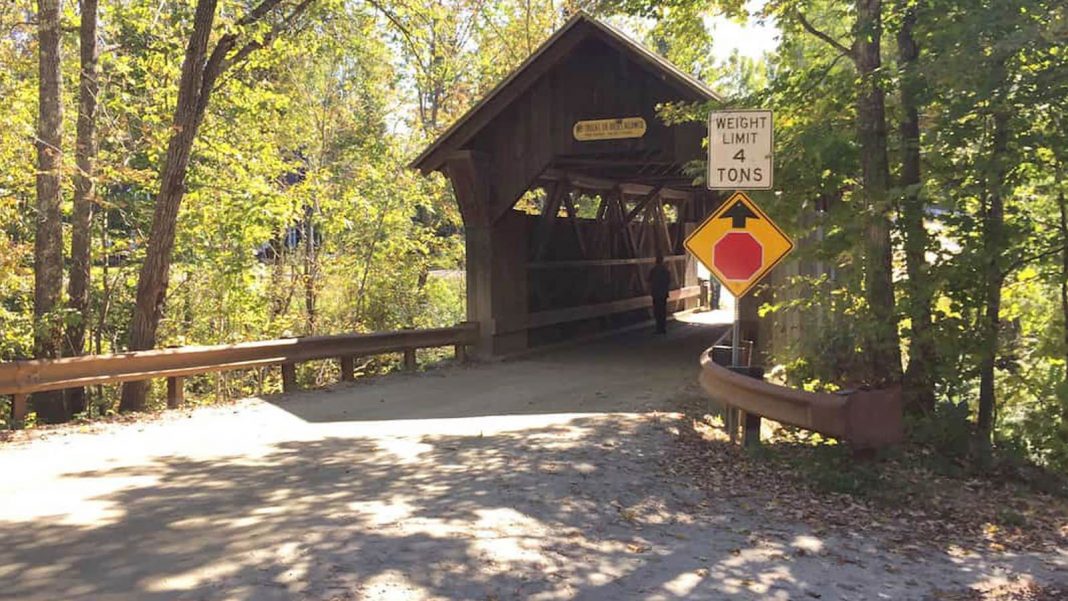 Stowe, Vermont is an ideal destination year-round for anyone who loves the outdoors, however its biggest draws are definitely the fall and winter. From leaf-peeping to winter sports, the mountain town really hits its stride towards year-end. Easy to reach from nearby hubs like Boston and New York, Stowe is accessible by car, rail and bus with the nearest airport located in Burlington. We went for a weekend stay right before the leaves change hues to see all the small town has to offer. Here are 8 things to do in Stowe, Vermont:

We stayed at Stoweflake Mountain Resort and Spa for our weekend getaway. The Baraw family has owned and operated the boutique hotel for three generations so far. It strikes the right balance between feeling quaint and homey with a touch of luxury. And as evidenced from its name, it has a spa on site complete with maple sugar scrubs and other treatments ode to natural wonders of the Green Mountain State. Plus, for the purpose of seeing Stowe’s many sights and partaking intivities, the resort is conveniently located in the center of it all, right on the main road.

Other than offering a host of spa treatments, Stoweflake also guests the chance to ride high atop the trees aboard a hot air balloon. They often break out the balloon during corporate retreats and you can take to the skies at night, hovering over the grounds in small groups for expansive aerial views.

The Stoweflake isn’t the only family owned lodging in town. Just up the road sits the Trapp Family Lodge. Yes, that Trapp family, of the Sound of Music fame! After making their escape from Nazi-occupied Austria, the family came to settle in the States and established the lodge not long after. In Stowe, the hills are alive with miles of mountain biking trails. You can rent a bike on site and also get instruction at any level. Their gift shop also sells postcards adorned with black and white photos of Maria von Trapp.

Vermont has more covered bridges than any other state! There’s over one hundred across the state and Stowe is home to Gold Brook Covered Bridge. Not only is the bridge itself picturesque, but so is the brook below. And if you walk across the wooden walkway, you’ll be treated to charming self-service farm stands.

Every year, hoards of hobbyists, mad scientists and amateur physicists gather in a grassy field adjacent to the Stoweflake for the annual Pumpkin Chuckin’ Festival. Now in its ninth edition, the festival embodies its name exactly; it’s all about how far participants can chuck their pumpkins. As an attendee, you’re likely to see all sorts of homemade and fabricated cannons and catapults. It’s an afternoon of absurd fun and all money raised from admission goes towards community organizations. Pumpkin Chuckin’ Festival takes place each year at the end of September. This year’s happens on Sunday, September 24, 2017.

The Stowe Farmer’s Market runs every Sunday – rain or shine – from late May to mid-October, offering amenities and mementos that are thoroughly Vermont. The weekly event brings together a host of vendors offering soap, honey and woolen yarn among other items. Vermont is very much dairy country, so acquiring locally made cheese can be the ultimate souvenir. In fact the Ben and Jerry’s factory is less than a 20 minute drive from Stowe, situated in Waterbury, Vermont. The market often features live music and is conveniently located in the middle of town off Mountain Road, directly across the street from the Stoweflake.

If one thing is synonymous with Vermont, it’s its maple syrup. If you’re looking to get your fix, Cold Hollow Cider Mill offers it all. Not only do they have a cider press and allow visitors to watch the process, but they have an abundance of maple-themed accoutrements on offer. Aside from authentic maple syrup, they also offer maple vinegar, maple butter and a variety of candies. A spin around their gift-shop feels as informative as any other actual tour.

Stowe has a burgeoning craft beer scene and there are a wide selection of breweries to visit as well as a guided beer tour to partake in while staying in Stowe. There’s even a brewery at the Trapp Family Lodge! The town hosts a craft beer festival in July and even a craft beer race for adventurous runners in May.

Nilina Mason-Campbell currently splits her time between Los Angeles, California and Portland, Oregon. In addition to adventures, she enjoys story-telling, daydreaming about living in an airstream and crafting her own line of illustrated souvenirs.