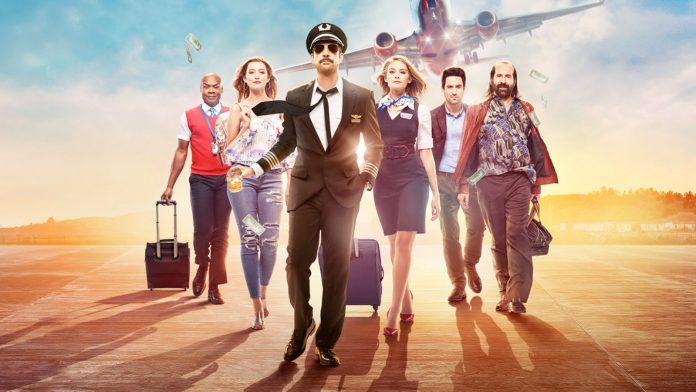 In the airline industry, there’s an old joke that goes, “How do you know when someone is an airline pilot? You don’t have to know — they’ll tell you!” FOX’s new comedy, LA to Vegas grabs ahold of that braggadocious pilot stereotype, and never lets go.

However, the show doesn’t only focus on the pilots. In the opening of Episode 1, a caption says, “There are people who fly from LA to Vegas every weekend. This is their story.” Next, we see basket-case blonde flight attendant Ronnie running through the terminal at LAX, changing clothes along the way, because she’s late to work her flight to Vegas for fictional Jackpot Airlines.

Before departure, Artem, a habitual gambler who knows Ronnie from flying all the time, is upset that someone is sitting in his lucky seat. Ronnie diffuses the situation by offering free beer to the person willing to let him have his special seat. That actually does happen in real life, but more often in a situation where a family was given assigned seats apart from each other.

The passenger list also includes a couple running off to get married, and a couple of exotic dancers. Airline insiders call weekend flights from LA or Burbank to Vegas “The Stripper Express,” because women will actually commute to Vegas on weekends for the high potential earnings. I can vouch for this, as I was loading a flight to Vegas a few years ago, when a bag popped open — and out tumbled a pile of women’s thong underwear and high heels.

A couple of other truths appear in the show that are familiar to frequent flyers, such as the over-abundance of questionable service animals, and the fact that in some cases, passengers are treated like animals themselves.

LA to Vegas carries a silliness and hyperbole about air travel not seen since the 1980 film, Airplane! You’ll see things that would never happen in real-life travel, such as the flight crew drinking shots in the airport, in uniform alongside the passengers they just flew with. Huge taboo! We also see Captain Dave, played by Dylan McDermott joking with passengers about getting high, and not in terms of altitude. Nowadays, we’d see tweets posted to the airline before getting off the ground.

All of the trailers for the show feature McDermott’s character, as well as Captain Stever, played by Dermot Mulroney — but Captain Stever doesn’t show up until Episode 3. In real life, people have confused McDermott and Mulroney for years, and their characters encounter each other as though they have a score to settle. Did you know Real that airline pilots and flight attendants have a no-fly list to keep themselves from being assigned flights with crew members they don’t get along with? It’s true!

As an aviation geek, a few other inaccuracies jumped out at me, such as mismatched planes. That’s pretty common for aviation shows, however. Most of the time, we see a Boeing 737 used for exterior shots, and the cabin looks pretty accurate to the 737, but it’s shorter, and missing an exit on the opposite side of the forward entrance.

LA to Vegas is getting a 6.4/10 rating on IMBD, while reviews on Google have been a bit more kind, with 89% rating it favorably. If you’re looking for a silly show that makes light of the frustrations of air travel, I recommend it. Some of the content is slightly mature, so it’s best to watch once your younger kids are out of the room. It airs Tuesday nights on FOX, and can be viewed on-demand. 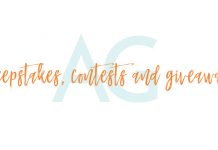 8Great: Adventure Travel Sweepstakes to Win in May, 2018