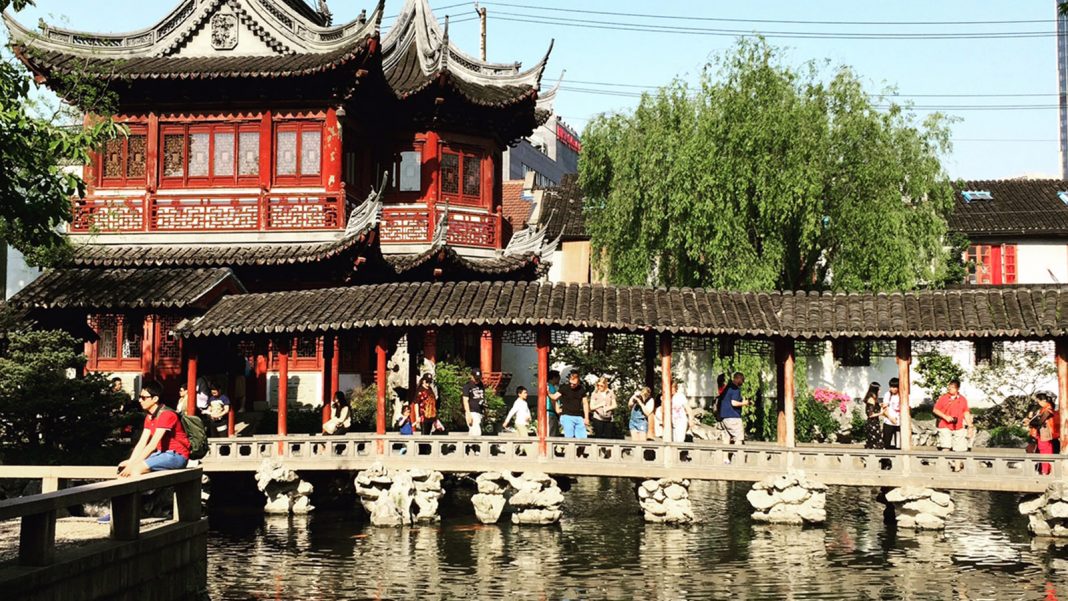 Shanghai is one of the most fascinating and photographed cities in the world, thanks to its positioning as a gateway from the west to the east and its futuristic cityscape. The Shanghai Tower, standing at more than 2,000 feet in height, and The Oriental Pearl TV Tower, with pink spheres that light up each night, are beacons of progression.

The modern skyline, known as the east side of the Pudong River, is a striking comparison to the historical area of the west side, known as The Bund– its buildings date back to the 1800’s.

Shanghai is definitely a city to be revisited over and over, due to its quickly changing landscape, bustling town centers, and international businesses that are helping shape the future of this part of China.

TRAVEL TIP: Take the MagLev high speed train from the airport to Longyang Road and Shanghai’s city center in 8 minutes.

Breakfast at The Grand Brasserie inside the Waldor Astoria

If you are not staying at the Waldorf Astoria on The Bund, drop in and experience their buffet breakfast. Consider the daily eggs benedict, fresh spinach and mushroom Bao, and the bevy of fresh fruit and pastries.

The Waldorf Astoria Shanghai. A step back into time if booking the stunning waterfront rooms and suites (as big as an apartment), or opt for the modern part of the hotel with designer rooms. Either option is spectacular for a stay.

It’s all about street food in Shanghai. Small shops boasting everything from fresh fruit to bao, pork and chicken dishes. Using the Waldorf Astoria as a beginning point, head right out of the entrance and down Sichuan Middle Road. Several foodie ops are with in a block of the hotel. Check out the ever popular and often line outside the door place, called WuFangZhai at 136 Sichuan Middle Road.

*Vegitarians/Pesicatarians will have a tough time eating here. Most dishes are chicken and pork.

The Long Bar in the Waldorf Astoria was built in 1910 and in 1911, it was established as the private Shanghai Club for British gentlemen. The almost 40 foot bar made of mahogany is a statement in itself. With the rise of capitalism, came the first KFC (Kentucky Fried Chicken) to Shanghai. The bar was taken apart in pieces to make way for the fast-food chain. Thankfully, KFC exited the space, and The Long Bar was reborn. Pick one of the several comfy bar chairs along the bar, or grab a table with a view of The Bund’s promenade. Handmade cocktails, Oyster Bar, and live music set the tone for one of the best pre-dinner experiences in Shanghai.

Dinner at Wei Jing Ge at the Waldorf Astoria

Step inside the elegant Wei Jing Ce Restaurant and experience a melding of Chinese regional cuisine from Shanghai, Canton and Huai Yang. Dishes are small yet sumptuous, and expertly plated to catch the eye of the diner.

Dining jacket is required for men.

Book a leisurely walking tour of The Bund with Abercrombie & Kent. Knowledgeable local guides take you along the river’s promenade, guiding guests through historical moments, buildings, and more. Learn about how many locals saved interiors of buildings from the Red Army, by covering up beautiful mosaic walls, ceilings, and atriums, now uncovered and breathtaking.

Take a stroll in front of the floral wall at the river front. A fun, free and entertaining place to people watch, take selfies and ogle at the breathtaking view of The Oriental Pearl TV Tower and Shanghai Tower across the river. Perfect for photo ops.

After dinner, take a Huangpu River cruise, and set sail past the east and west sides of Shanghai. Photo ops are amazing from the river view point.

As small as the city may seem–46.87 miles squared, it’s packed with things to do and see. Save some time and book at city tour–Segway tours, shuttle tours, hop-on-hop-off bus tours, even a magic bus tour with “hippie hosts” that take you to landmarks from the “Summer of Love” make seeing as much as possible easy. A tour will get you familiar with locales, and which ones to visit on the next trip.

Breakfast at The Grand Brasserie

Take full advantage of the restaurant’s breakfast buffet for Day 2’s breakfast. Owlets made to order, salads and Chinese food favorites are on order.

Lunch at Sichuan Citizen in the French Concession

Choose Sichuan Citizen if you like hot and spicy-sweet. Great dishes served family style. For the adventurous, try the bullfrog. *Don’t miss: The Basil Drop cocktail

Don’t let the mall-type locale fool you. Xin Rong Ji is a Michelin Star restaurant. A main dining area, with 7 private tables for small groups, makes for a festive evening and some amazing Chinese food. Known for their dim sum, sautéed yellow croaker and BBQ pork served in a paper bag, book an early dinner time, because the seafood from Taizhou sells out early.

Take the morning to explore the French Concession area. Shopping is amazing here, from Gucci, Mui-Mui to Versace, small designer boutiques and more. Parks are peppered through out the concession. Dance groups practice here, even inviting a tourist or two to join them and learn various traditional dances mixed with a waltz.

A fun place to spend the afternoon is the Tian Zi Fang art district. Several tiny boutiques line the narrow corridors, along with cafes and small bars. Look for one shop with an orange and white cat, who will want to play chase around the shop (get your video cameras ready as he likes to scare and leap at unsuspecting tourists).

A more hectic, populated and very touristy attraction, yet something not to be missed, is the beautiful Yuyuan Garden in the Old City. Be prepared to spend several hours gazing at the old palace and shopping at the many outdoor vendor booths.

For those who like to explore Shanghai’s nightlife, get ready. There are lounges, bars and dance spots to suit any party reveler. Don’t Miss: The M1NT night club, sitting atop the 24th floor with views of Shanghai. A long hallway flanked with shark tanks, makes for a grand entrance into an uber-stylish bar and dance space. This is where the beautiful people drop in– from the famous to fashion models from all over the world.