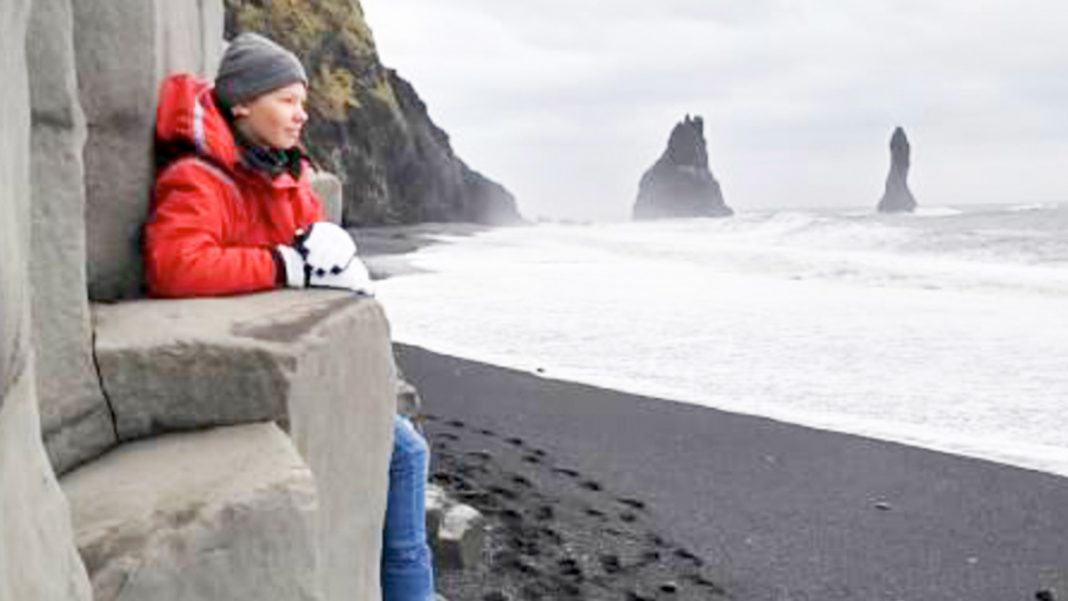 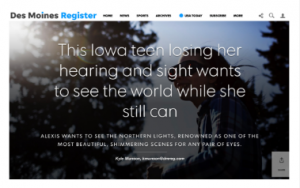 I was sitting at my desk on an uneventful day during the summer. A random news story from an Iowa newspaper popped up, just begging me to click on it. The story. Alexis Myers, a young teen, who was going deaf and blind. All she wants to do was see the world. And Iceland. And the Northern Lights. 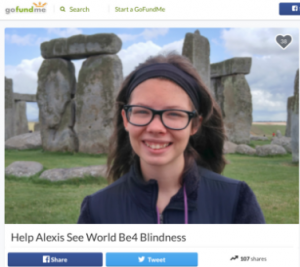 First, I cried. What she was facing was unimaginable to me. My job entails all senses, and even losing one of them would be heartbreaking. Alexis would be losing two. I also sat thinking, it’s one thing to be born without knowing sight or sounds, but having it taken away from someone…how cruel.

These important senses shape us, how we hear and see the world around us, its beauty, its songs, the people, places and things. Perhaps we may take our sight and hearing for granted? I later observe on the trip, that this is not the case for Alexis.

For her, each moment in time becomes a snapshot in her mind instinctively, so when she does go blind, she has her pictures she can pull from memory.

I picked up the phone and called Kyle Munson, the journalist who had written the article about Alexis, who connected me to the Myers family.

Within a short period of time, I was talking to Alexis’ mom, Kristen, then texting Alexis. Kristen explained, it was better to text her to introduce myself, because Alexis couldn’t hear on the phone. 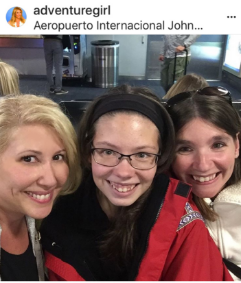 My first text was, “Hi, I’m Stef Michaels, Adventure Girl. I just talked to your Mom and I’m going to be taking you to Iceland.

Her text back to me was simple and I couldn’t tell if she was excited about it or not. It just read, “Cool”.

I reached out to several clients in the travel space, created a Gofundme for the trip to help finance it, and got to work on booking airline tickets, hotels and activities for Alexis and her Mom. The generosity from people all over the world, and those at Iceland Air and Inspired By Iceland— the official tourism site, was humbling. 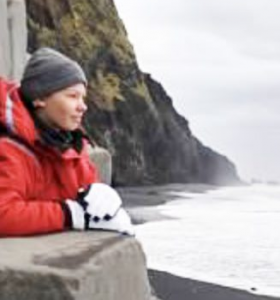 October was slated for our Iceland adventure. My first contact with the Myers had been in June. Just in those short few months, eye-sight changed quickly for Alexis.

She had an increased loss of vision, so there was an urgency to get the trip off the ground.

Meeting Alexis and her Mom, Kristen at JFK airport was interesting. 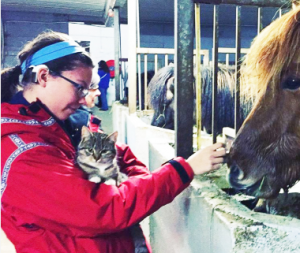 Her hearing was far worse than I had expected, even with her cochlear implant, and she had been suffering from unexpected falling, which Dr.’s thought might be from something called dominant optic atrophy, or the mutation of her OPA-1 (optic atrophy) gene, a rare and incurable genetic disease of her eyes.

I soon realized that I talked fast. I needed to slow down my pace, face her to speak so she could read my lips, and then struggle with my really bad sign language to communicate with her further.

Over the course a few days on the island, Alexis got more comfortable being around me, and we learned some things about each other. She is whip smart, a straight-A student and an animal lover. She petted or tried to pick up every animal she came across on our journey.

Another standout, there is no pity party with her. She seems to be rolling forward with her fate. I’m sure she has those horrible, life-crushing moments, but I was not privy to this nor did I have the guts to ask her, wanting to keep the trip on a high note for her.

I was also awe-struck by her sensibility and simply just wanting to be treated like a typical teenager. At times, I would catch her fixing her hair so people wouldn’t catch a glimpse of her cochlear implant, and she would blush if her Mom and I talked about boys.

After our goodbyes, I settled in to my flight for my journey home with a lot of great memories of our trip and things to think about from it.

As much as Alexis wants to be a typical teenager, which she is in many ways and in others, she isn’t. Her grace and dignity in dealing with her disease, and handling so much at 15 years of age, is simply remarkable.

(I hope you like the video I put together of what Alexis got to experience in the magical land of Iceland).