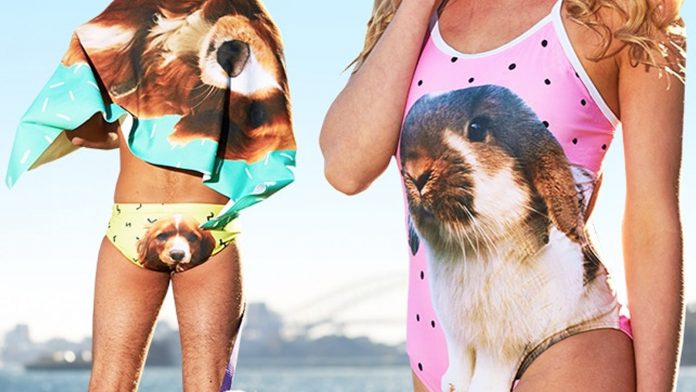 Three Aussies from Sydney who are “obsessed with our pets” have created an on-demand fashion product that is irresistible. The team created Petflair to help support Pound Paws, a charity that finds loving owners for shelter animals on death row.

Britt is founder of their partner charity Pound Paws, which connects owners with pets on death row in pounds. She wanted to find a way to not only raise funds for the charity, but showcase the amazing companionship & love which owners can have with their pets.

Tyler is an Olympic Water Polo player for Australia, who had a custom swimwear business (and knows all about this stuff!). When he was asked to print a dog on a swimsuit in 2016, he knew it was special idea.

Charlie is a dog-mad computer programmer and designer, who’s made the custom ordering system that could make Petflair possible.

Products include towels, beach bags, stickers and swimwear. Ladies swimsuits come in three one-piece styles, while men are offered only one option– a snug pair of “Max” bottoms.

In just over 20 days after launching their Kickstarter campaign, they has surpassed the initial fundraising ask of $12,000. Currently, over 370 donors have pledged $30,000.

Who says fundraising is “ruff”!