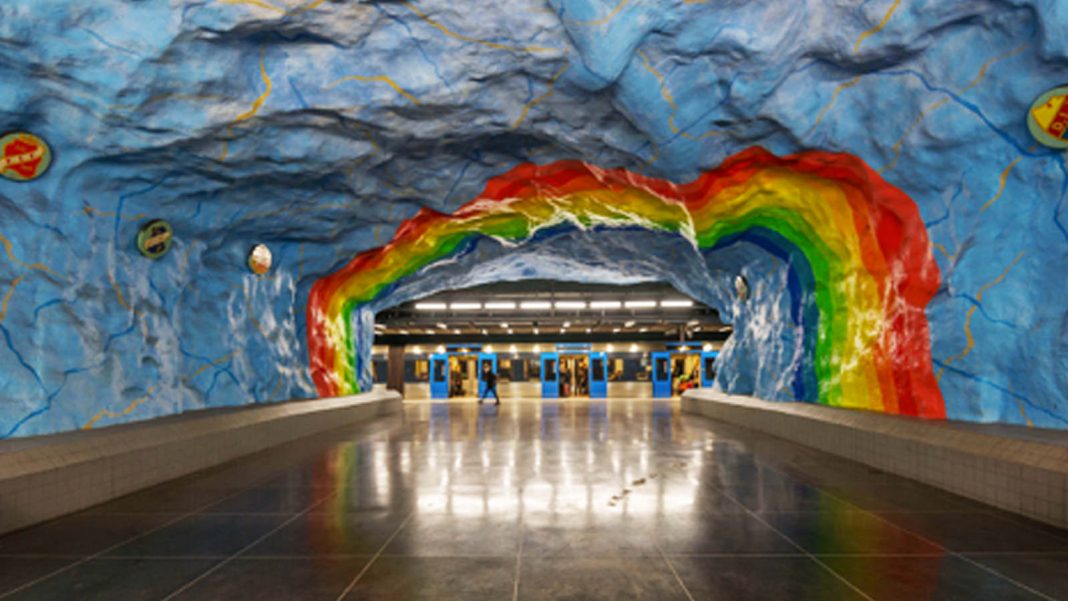 The subway in Stockholm (in Swedish: tunnelbana) has often been claimed as the world’s most beautiful underground system.

The underground in Sweden’s capital city is not just a public transportation system but the world’s longest art gallery. The 110 kilometres (68 miles) long underground network presents a collection of public art. Ninety out of Stockholm’s hundred metro stations have art, created by over hundred different artists. Here you can get a glimpse of the most beautiful stations.

1. Solna Centrum – To the untrained eye, this station is an explosion of intense colours. However the walls here are covered with issues relevant to 1970s Sweden: rural depopulation, deforestation and the new environmental movement.

2. Tensta – The artist has celebrated the multicultural area of Tensta through the theme of solidarity and unity. Along the platform you can see the word brotherhood painted in 18 different languages.

3. Högdalen – A station outside can sometimes feel very cold and lonely. So, the artist Birgitta Muhr has created several tulips to keep travellers company.

4. Kungsträdgården – The station has been transformed into an underground garden, with the prominent use of green symbolising life and nature. The station also tells the history of the former royal garden and the long lost palace of Makalösa.

5. Universitetet – Artist Françoise Schein has taken inspiration from the Swedish botanist, Car von Linné’s texts and journeys. With this, she wanted to promote a deeper understanding of democracy and human rights – which is written on one of the station walls.

6. Hallonbergen – A number of children’s drawings have come to life at this station. You can even play hopscotch whilst waiting for your train.

7. Stadion – A tribute to the Olympic Games, which was hosted here in 1912, and was the first with representation from all continents. The Olympic colours have been used to create a giant rainbow as you walk onto the platform.

8. Thorildsplan – An eccentric station filled with pixelated tiles on the walls featuring symbols and characters from popular video games.

Behind the scenes:
One of Sweden’s most famous writers August Strindberg started a debate within the art world in the 19th century making the statement that “Art can not continue to be exclusive to just some people, because then it won’t be long-lived”. He felt there was a need to make the art public and move the art outside of the museums.

This argument was a societal issue then as much as it is now. In the 1950s the artists Siri Derkert and Vera Nilsson brought this to the forefront and turned this into a political debate, after research done in Paris indicated that Parisians spent four years of their lifetime on the subway.

By installing art on the subway, art could become more accessible to the public and have a positive impact on people’s everyday life.

The first competition to decorate the Stockholm metro was announced in 1956. Twenty-one different artists later got the honor to install their art. Some artists had more radical ideas than others. In the 70s Trafikens Konstnämnd, a committee deciding about the art on the metro stations, was established. It continues its work still on the present day.

As a result, the subway system is continuously ranked amongst the most beautiful in the world.

Over 1 million trips are counted in the Stockholm’s metro every day. The art on the metro makes their journeys better but also raises important questions about societal issues, such as women’s rights – (Östermalmstorg), inclusivity (Tensta station), and deforestation (Solna station) – a big problem in Sweden during the 70s.

To learn more about the Art in the Stations have a look at this interactive guide. 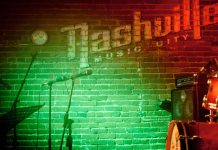