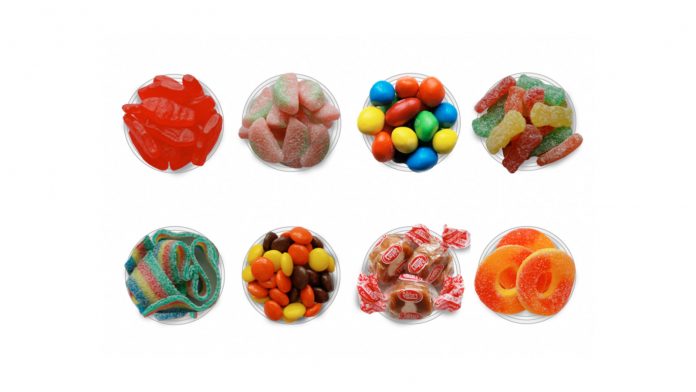 We reported in an earlier story on two Candy Entrepreneurs–Leslie Lyon and Elisabeth Vezzani, who took a look at the sweets industry and noted that there was the lack of thoughtful, and clever gifts. They were inspired to create Sugarwish– an online candy lover’s haven for “choosing your favorites” aka candy delectables and get them delivered to your door. They became ultimate candy pros in research, consumer tastes and what candy lovers ultimately choose to satiate their sweet tooth.

So, we thought we’d ask them what candies fly off the shelves at Denver based Sugarwish headquarters?

Did you know airheads are made in a machine very similar to the toys used to create long strips of Play Doh? Also, the brand name Airheads was named by the Director of Marketing at the time’s son upon being asked “What would you call a friend who did something silly?”

Our all-time favorite nostalgic candy also known as the Bull’s Eye because of its cream filling in the center. We all know and love the Original/Vanilla flavor but did you know there are 5 other flavors? It’s OK we didn’t either. Celeb loving fan: Cindy Crawford.

Reese’s Pieces is the brainchild of Harry Reese, a former Hershey employee. Reese’s Pieces lucked into one of the most successful product placement after Spielberg’s first pick (M&M’s) declined the opportunity to partner up. Thanks to E.T. products sales jumped 65% just 2 weeks after the movie premiered.

Ever wonder if Swedish Fish were really Swedish? Rest assured that is where the candy originated. Known originally as a wine gum candy, these fish-shaped candies became a huge hit in North America when a Swedish manufacturer started exporting them in 1958. Tack (aka. thank you) Sweden.

True, but actually they are named after founders, Forrest Mars and Bruce Murrie. Peanut M&M’s were the first M&M spinoff, but Mars was actually allergic to peanuts so he never got to taste his creation.

The most popular “kid” made out of candy has close to 4 million Facebook likes. Created in Canada they started out as Martians i.e. “Mars Men” to capitalize on the popularity of UFO’s. Upon being introduced to the United States, the name was quickly changed to Sour Patch Kids capitalizing on the ever-popular Cabbage Patch Kids craze. Who knew? Celeb loving fan: The Biebs.

Mirror mirror on the wall — the gummy peach ring is by far the most popular of them all. These peach flavored chewy, fruity, dusted with just the right amount of sugar, paved the way for the gummy ring revolution. Celeb loving fan: Jennifer Love Hewitt.